A Practical Guide to Quasi-Experimental Methods (PSM and DID) 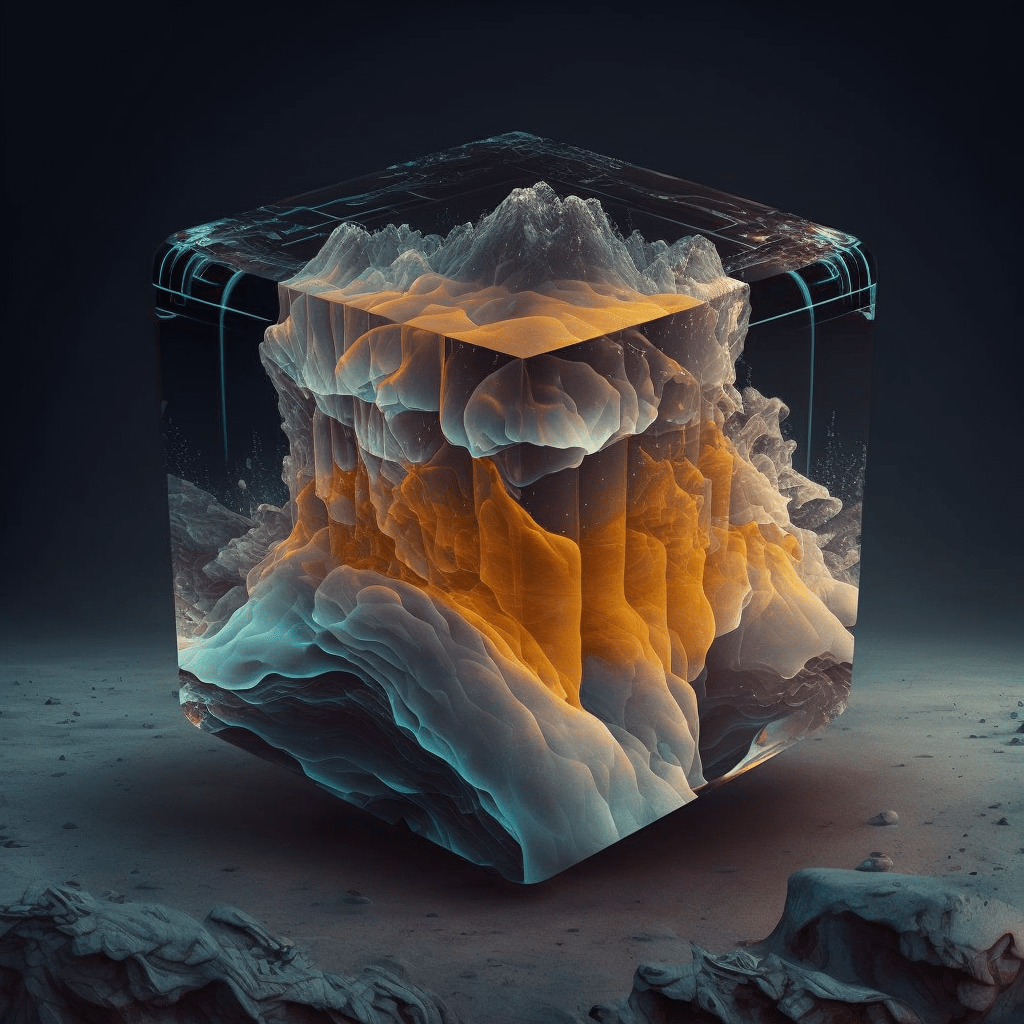 A quasi-experiment is an empirical interventional study used to estimate the causal impact of an intervention on target population without random assignment. - Wikipedia

In this tutorial, we use simple datasets to illustrate two quasi-experimental methods: Propensity Score Matching (PSM) and Difference-in-differences (DID). We focus on the practical side of applying the methods and provide code in both Python and R via Kaggle (see links below).

This is joint work with my friend Dr. Gang Wang.

Propensity Score Matching (PSM) is a quasi-experimental method in which the researcher uses statistical techniques to construct an artificial control group by matching each treated unit with a non-treated unit of similar characteristics. Using these matches, the researcher can estimate the impact of an intervention. - World Bank

We use two datasets to show:

The Groupon dataset is from Gang’s paper.

We have shared the datasets and code (Python by me and R by Gang) on Kaggle:

We only focus on the key concepts and issues in this tutorial and advise the readers to go over the annotated code for details.

smoker.csv is a simple simulated dataset about patients with three columns: 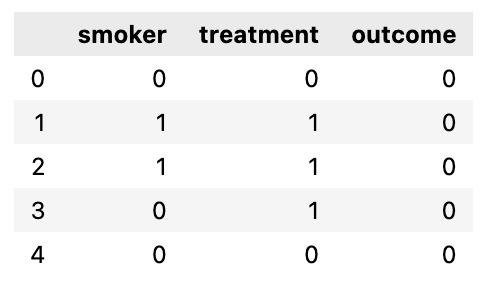 If we ignore the smoker status and compare the death rate in the control group (23.5%) and the treatment group (34%), we would have the following conclusion:

So, the treatment should NOT be done.

Now let’s look at the smoker patient ratio in control and treatment groups: 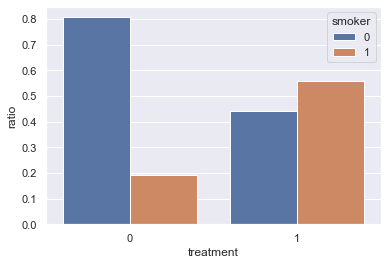 There are way more smokers among the patients in the treatment group (56%) compared with the control group (19%) - is that possible that smoking leads to a higher death rate?

After matching, the smoker patient ratio in control and treatment groups is the same: 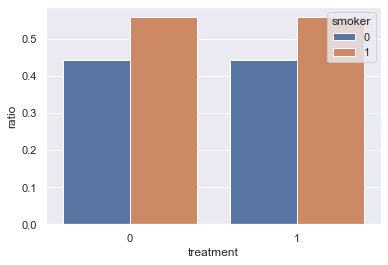 Note: given there are patents that are not matched, the total number of patients in the matched dataset is often smaller than the original dataset.

Now, if we compare the death rate in the matched control group (56%) and treatment group (34%), we would have the following conclusion:

So, the treatment should be done.

After matching, our conclusion about the treatment is the opposite!

In the simple matching example above, we match patients only based on one binary feature: smoker or not. In real datasets used in observational studies, each observation often has many features. Matching observations with the same values across multiple features is often not feasible.

Let’s look at a Groupon example: 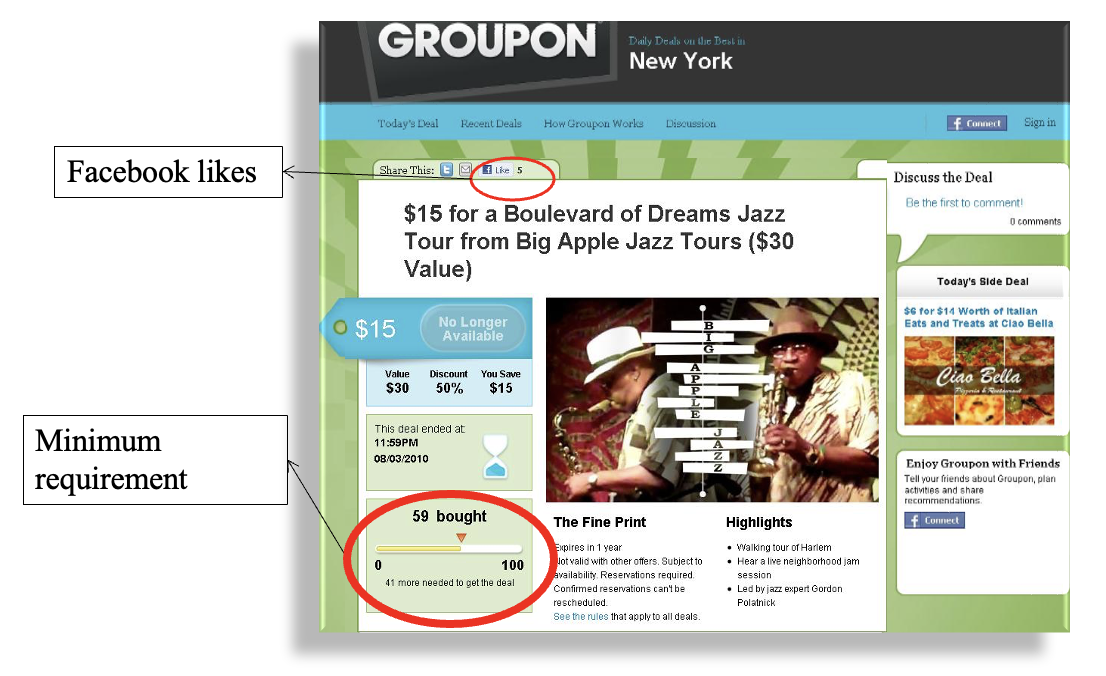 Some Groupon deals have a minimal requirement, e.g., as shown in the picture above, the deal only works when there are at least 100 committed buyers.

So, we can define:

Does having the minimal requirement affect the deal outcomes, such as revenue, quantity sold, and Facebook likes received?

groupon.csv has the following structure:

Finding two deals from different groups with exact matches across different features, such as price, coupon_duration, featured or not, etc. would be very difficult if not impossible.

Therefore, we need to use propensity score matching.

The propensity score definition is simple: 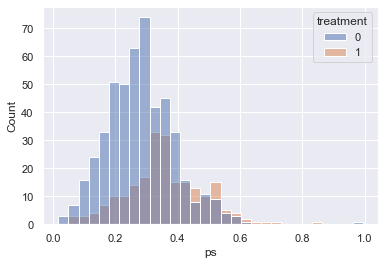 The figure above shows major overlaps of the propensity scores in the control and treatment group, which is a good foundation for the matching, i.e., if there are no or few overlaps, it’s impossible/difficult to find enough matches.

For example, if min_req is used to calculate the propensity score, there won’t be any overlaps as shown below: 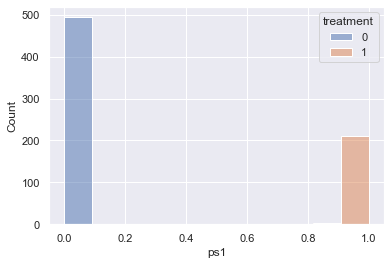 If we plot revenue with start_date, we can see that the date is highly correlated with treatment:

if start_date is used to calculate the propensity score, there is only little overlap resulting in not enough matched observations: 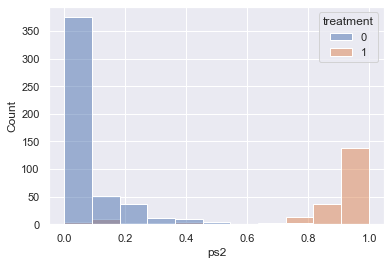 The matching based on propensity score is simple:

One way to see the matching effect is to show the mean difference of the features from control vs. treatment groups before and after the match - we hope to decrease the differences via matching, i.e., the characteristics of the deals are more similar in both control and treatment groups after matching.

The following table and figure show the before/after p-values of the mean difference and the effect size for different features used for calculating the propensity score: 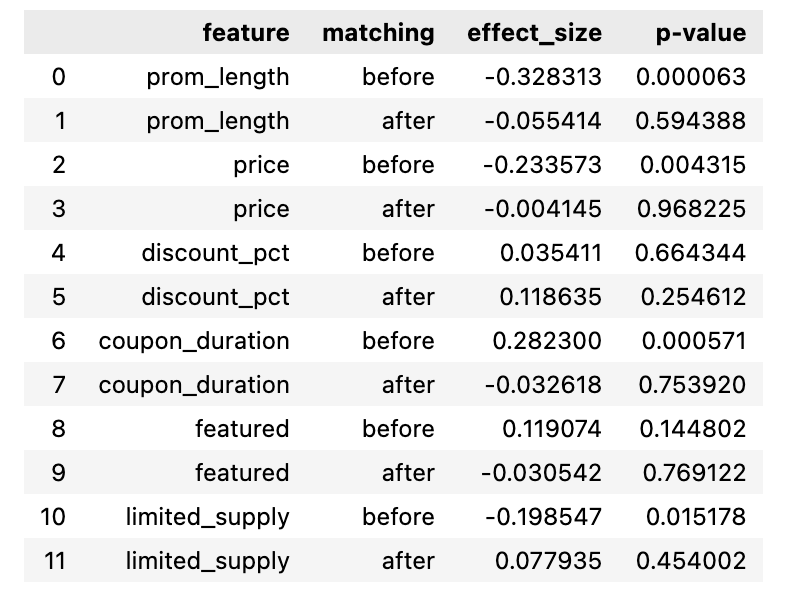 We can see except that discount_pct and featured are not significant, all other features are more similar/balanced after matching.

We can then conduct t-tests (see code notebook for details) for the dependent variables in the dataset before and after the match:

In the Propensity Score Matching (Python) notebook, I also include the code to use psmpy package, which generates similar results. Given that the package is not open-sourced yet - I cannot check the details.

The difference-in-differences method is a quasi-experimental approach that compares the changes in outcomes over time between a population enrolled in a program (the treatment group) and a population that is not (the comparison group). It is a useful tool for data analysis. - World Bank

The full Python code can be accessed at Kaggle: Difference-in-Differences in Python

The dataset is adapted from the dataset in Card and Krueger (1994), which estimates the causal effect of an increase in the state minimum wage on the employment.

The calculation of DID is simple:

The same DID result can be obtained via regression, which allows adding control variables if needed:

The following shows the result of the regression for the employment dataset: 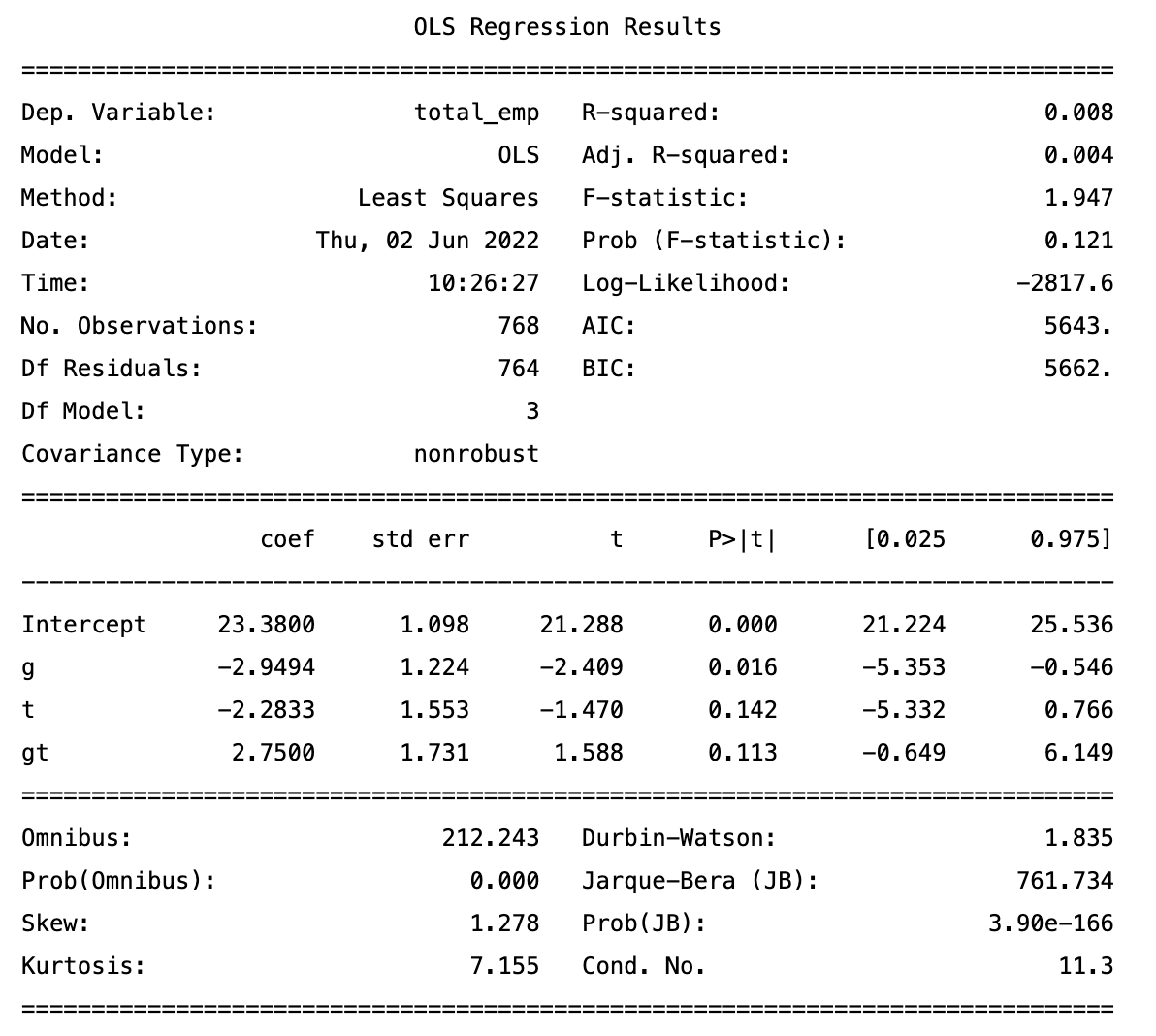 The p-value for $\beta_3$ in this example is not significant, which means that the average total employees per restaurant increased by 2.75 FTE (full-time equivalent) after the minimal salary raise but the result may be just due to random factors.

PS. The image for this post is generated via Midjourney using the prompt “Quasi-Experimental Methods”.